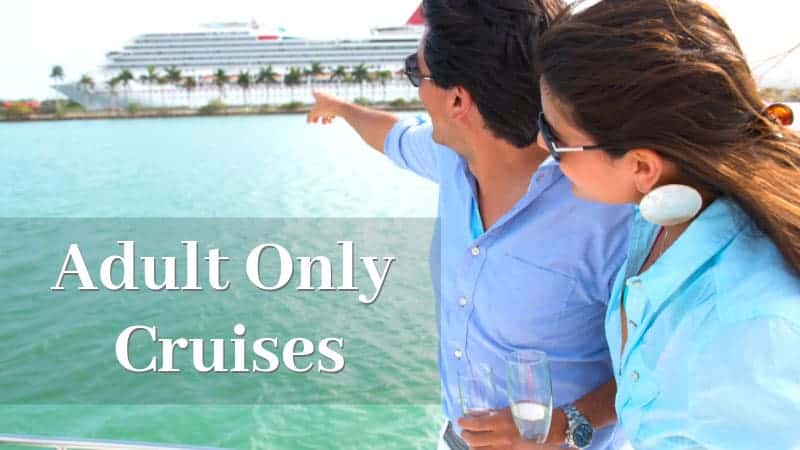 In the last few decades, the cruise industry has ballooned into a multi-billion-dollar industry with more than 27 million people going on cruises every year. It’s also gotten much more diverse than it used to be. Now, you can find a cruise in pretty much every category, including families with kids, adventurers, foodies and luxury travelers. You can choose everything from room size and onboard facilities, to itineraries and even the general atmosphere of the cruise ship. Now, a new trend has emerged: adult only cruises.

People who are looking for a relaxing and quiet cruise trip can now opt for adult only cruises. No more yelling children in the pool or crying toddlers in the restaurants. This relatively new concept has emerged due to the popularity of adult only areas aboard regular cruise ships. It was only a matter of time before this was extended to entire ships.

While most cruise lines still focus on offering family-friendly cruises, there are some that have pioneered adult-only cruises. Their ships are either entirely kid-free or at least their (lack of) kid-friendly facilities keep away traveling families. Some cruise lines simply have adult-only ships; others still accept children but definitely have fewer on board.

The key to finding adult-only cruises is looking for those sailings that lack family appeal. Ships without children facilities and cruises with a strong focus on culture, food and history will naturally have far fewer kids onboard. Below, you’ll find some of the best adult-only cruises available today.

With a strict 18-years-or-older policy, all Viking Ocean Cruises have been adult-only cruises since the very beginning. Ever since they revolutionized the river cruise industry, with stylish ships appealing to an older demographic, they’ve been one of the leading cruise lines for grownups. With itineraries focused on immersion in local culture, cuisine and onshore activities, it’s a fantastic choice for a more sophisticated (and longer) cruise.

Instead of offering all kinds of non-stop entertainment and 24-hour buffet restaurants, Viking Ocean Cruises gives its passengers the chance to actually relax in between ports. They strive to offer, as they themselves put it, “The Thinking Person’s Cruise“. Every detail you see on board a Viking ship was thoughtfully designed to allow you to completely immerse yourself in the destinations you’re visiting, their cultures, art, history and cuisine.

There are tasting of local wines guided by a sommelier, cooking classes and guest lectures. Curated libraries provide the opportunity to read up on everything and anything you’d like. It’s not only about nourishing your intellect, creativity and spirit, though. You can also pamper your body at the on-board fitness center and spa, a sanctuary of typical Nordic wellness featuring a sauna, various pools and baths, and even a snow grotto.

The iconic Viking ships sail all over the world, including the Mediterranean, Scandinavia, the Caribbean and East Asia, and even round-the-world cruises.

Although Norwegian Cruise Line‘s cruise ships are not exclusively for adults, many of them do have their very own adult-only decks, areas and venues. This makes Norwegian an affordable option for those who are looking for a getaway without (the) kids, but don’t want to spend a ton of money on adult-only cruises with those smaller, more expensive cruise lines.

Its award-winning accommodation area The Haven symbolizes what’s possible on large modern-day cruise ships. Located at the top of various Norwegian ships, they’re the most luxurious, spacious and beautifully decorated accommodations available on this cruise line. When staying there, guests still have access to all other areas on the ship, but can retreat to their very own, private adults-only area. Like they say, you’ll be “in your own ship within a ship”, a place featuring 24-hour butler and concierge services, a private The Haven sundeck and courtyard, lounge and restaurant. During your entire stay, you’ll also have priority access elsewhere on the ship.

Norwegian Haven and its amazing facilities and services is available on the following Norwegian ships: Escape, Getaway, Breakaway, Epic, Gem, Jade, Jewel, Bliss and Pearl. Note that specific facilities and accommodation do vary between ships.

Another major cruise line with its own exclusive on-board sanctuary is Celebrity Cruises. Known as The Retreat, this brand-new feature was introduced by Celebrity Edge in November 2018 and incorporation in the rest of Celebrity’s fleet started in February 2019, as part of the company’s multi-million-dollar modernization project. Having been a cruise industry leader for decades, they continue that tradition with their exclusive The Retreat. 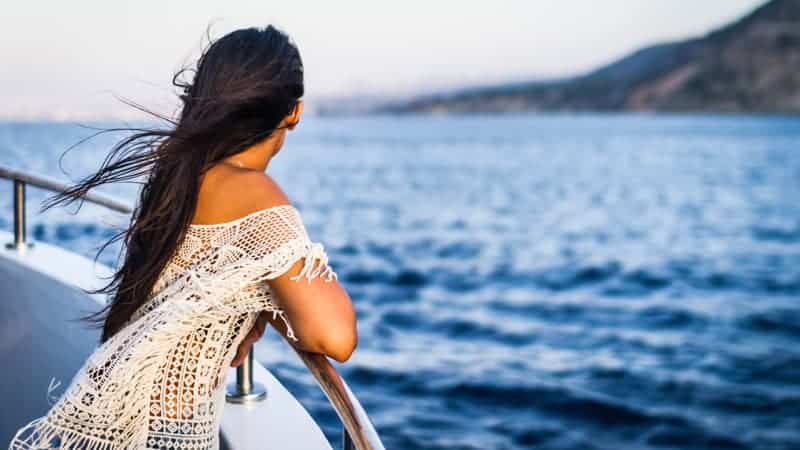 This is, however, not just an extra amenity or service. It’s not simply a place either. The Retreat is Celebrity’s entire suite experience made personal. Celebrity is one of very few major cruise lines in the world that offer every Retreat guest their own personal butler, private restaurant and exclusive lounge. It’s the ultimate adult-only experience on a massive cruise ship.

The exclusive Luminae at The Retreat has menus created personally by the restaurant’s Michelin-starred chef. At this restaurant, you’ll find dishes served nowhere else on the ship. There’s also a full-size pool and a hot tub, a spacious outdoor lounge and even “Pool Butlers”. The beauty of it? It’s all complimentary to Retreat guests. If you’ve always wanted to feel special, The Retreat is where that happens.

Hitting the seas in 2020, Richard Branson’s Virgin Voyages will be a complete adult-only cruise line. To sail on all its ships, passengers have to be 18 years or older. The brand new company’s aim is to make cruising hip, cool and maybe even sexy. Branson himself said that the goal is to draw in people who would have never considered going on a cruise before. Cutting-edge amenities will range from a test kitchen to the world’s largest daybed at sea and a fancy nightclub. 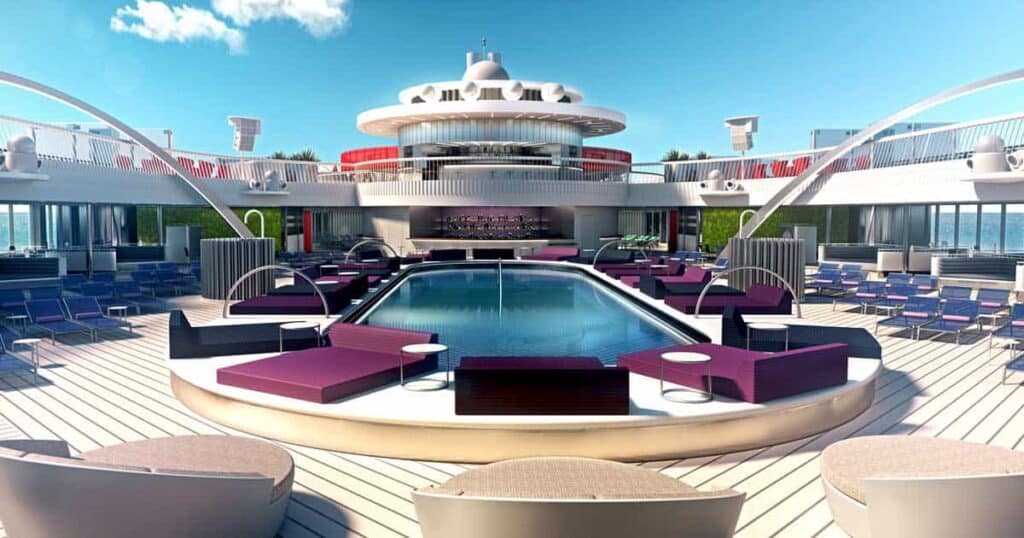 Eventually, Virgin Voyages’ fleet will consist of three ships, each catering to adults 18 years and older. The maiden ship, the Scarlet Lady, will depart on its inaugural sailing in 2020 from Miami and head to the Caribbean. This high-end, ultra-modern cruise ship will accommodate up to 2,770 passengers and have a strong focus on the body and mind. Adults can get pampered at a world-class spa, complete with salt room, hydrotherapy pool, quartz beds, mudroom and the like. Outside, an outdoor sundeck and yoga area will be flanked by a running track. Additionally, the indoor gym, boxing ring and group classes will offer even more physical enjoyment.

Let’s not forget, though, that Virgin Voyages will also feature tons of culinary and entertainment venues. This all to make Virgin Voyages one of the best ever adult-only cruise lines.

The perfect example of what sparked this new type of cruising is the Serenity Adult-Only Retreat. While Carnival is definitely a family-friendly cruise line, it’s this kind of 21+ retreats that have proven immensely popular among grown-up passengers. You’ll still be at the same ship as the kids, but while they’re participating in a themed event or other kids’ activity, you’ll be swaying in a hammock, sitting at the bar or simply lazing in a sunbed.

Additionally, Carnival Cruises is a great choice for honeymoon cruises, just because of their various adult-only areas. The Alchemy Bar, Piano Bar and Tequila Bar, for example, are accessible only to people 21 years and older, great places to kick back with an adult beverage. For more evening action, you can head to the Nightclub, where DJs spin the latest hits and theme parties are no uncommon.

While originally a millennial-only cruise line, U by Uniworld changed its age restrictions in 2018 and now offers river cruises in Europe to adults of all ages. They still focus heavily on younger adults in their branding and marketing, though, which sets them apart from other river cruise lines.

Their itineraries are packed with immersive activities, social events and cultural programs, catering perfectly to the millennial lifestyle where experiences are more important than materialism. On their river cruises on the rivers of the Netherlands, Germany, Austria, Slovakia and Hungary, you can expect plenty of fun things to do, from countryside bike rides to hands-on cocktail exhibits, cultural walking tours and kayaking excursions.

U by Uniworld currently has two ships, called simply The A and The B, both able to accommodate 120 passengers. Made to cruise Europe’s most iconic rivers, they’re not just a floating boutique hotel, but also a water taxi, yoga studio, nightclub, restaurant and bar. Many of the available on-board activities are also a bit “out of the box” and you won’t find them on any other cruise line. They include things like tent camping on the ship’s rooftop, silent disco parties, and top-deck wine and paint classes in some of Europe’s most picturesque locations.