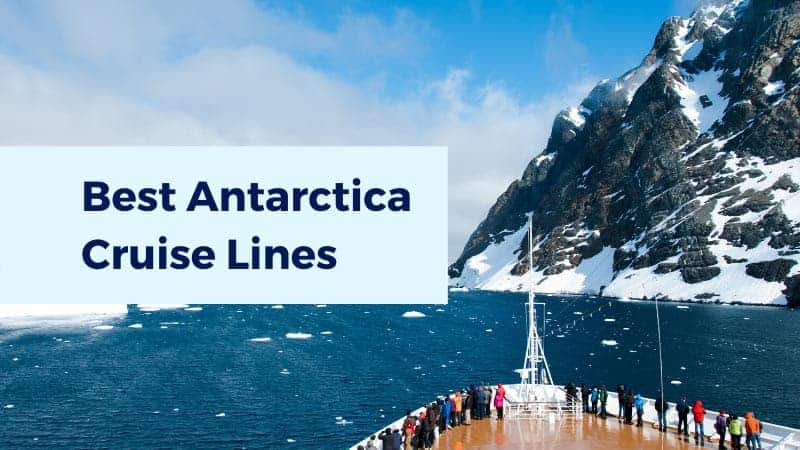 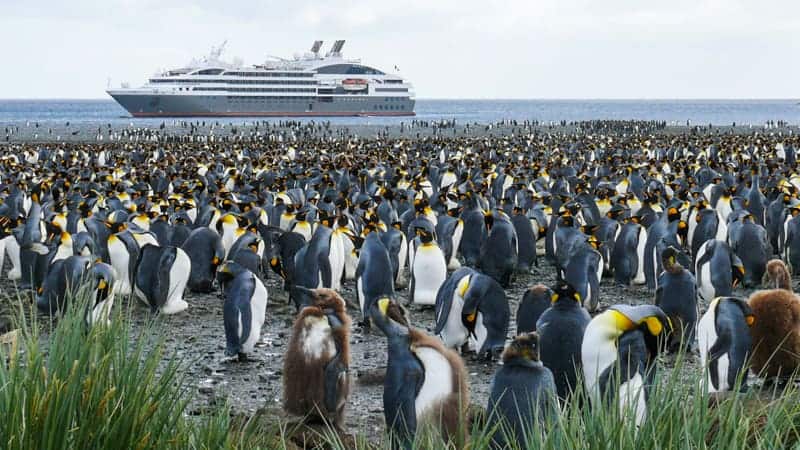 Why Cruise to Antarctica?

In recent years, remote destinations have become increasingly popular for various reasons. Adventure travelers continue to seek out unexplored and far-flung destinations away from the ever-expanding mass tourism.

Both the Arctic and Antarctic Circles begin showcasing the devastating effects of climate change, which attracts people who want to catch what could be a last glimpses of polar ice and animals. Additionally, cruise enthusiasts look for quieter ports, while retirees are checking epic places off of their bucket lists.

Naturalists, on the other hand, will relish the opportunity to see penguin rookeries, seals, whales and other iconic wildlife. Massive floating icebergs and calving glaciers provide other natural attractions you won’t soon forget.

This all adds up to a niche in the cruise industry with arguably the most potential of them all. Although Antarctica might not be your preferred cruise destination—you could, of course, also cruise to Hawaii, the Caribbean or Mediterranean for less money—it is unquestionably one of Earth’s most jaw-dropping places.

Plus, the only way normal people like you and us could ever get to the southernmost continent is on a cruise. It’s literally the only continent on the planet that you can only reach by boat (unless you’re a millionaire and charter a plane, or are a skilled scientist on a mission). 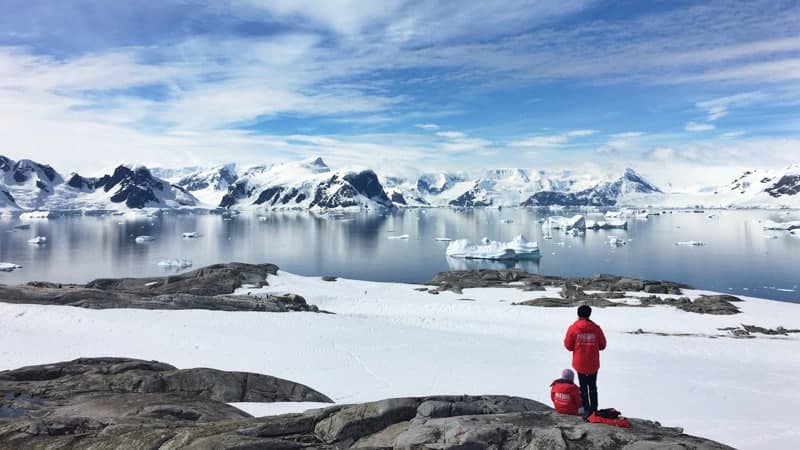 Of all major cruise lines in the world, only three effectively offer Antarctica cruises: Silversea, Princess and Hurtigruten. We’re highlighting them here because they’re the most well-known companies. And if you’re looking for the best Antarctica cruise on a larger ship, chances are you’ll find it with them.

As can be expected, the most popular and best Antarctica cruises take place from late-November through late-February—the summer months in the Southern Hemisphere.

“Awaken your soul to the wonder of Antarctica”, says Silversea Cruises on their website. And they do a great job invoking the sense of wilderness and wildness with their descriptions. Silversea’s Antarctica cruises are among the most luxurious, comfortable and stylish ways to reach the “last great wilderness frontier” on the planet.

Currently, Silversea Cruises deploys two of its cruise ships to Antarctica: the Silver Explorer (144 guests and 118 crew) and the Silver Cloud (240 guests and 212 crew). All three are expedition ships, designed to weather the harsh conditions of the polar regions. Their fortified hulls make it possible to sail through icy waters, while fleets of Zodiac boats, 12 and 18 boats respectively, allow passengers to visit even more off-the-beaten-path places. The Silver Cloud has 10 sea kayaks on board as well.

The smaller Silver Explorer goes on voyages to Antarctica that last 6 to 22 days, with sailings available from Dunedin (New Zealand), Ushuaia (Argentina) and even King George Island (South Shetland Islands). On board the Explorer, you’ll find all kinds of great amenities on board, from Tor’s Observation Library and the Zagara Beauty Spa and Salon to the Panorama Lounge and Fitness Center.

The Silver Cloud, on the other hand, undertakes 10-day to 16-day Antarctica cruises in the Antarctic summer, nearly all of which are round-trips from Ushuaia (Argentina). There’s no lack of facilities on board the Silver Cloud, which include a Photo Studio, Explorer Lounge, Connoisseur’s Corner, Pool Deck, Zagara Beauty Salon and Spa, and the Fitness Center.

Additionally, the Silver Wind (274 guests and 239 crew after November 2020) will undergo a major refurbishment in the summer of 2020 in preparation for its new routes to Antarctica. This refurbishment will make it one of the most versatile cruise ships in the world, able to sail from the frozen waters of the Antarctica to the sun-soaked shores of the Mediterranean.

This ship, too, will sail mainly from and to Ushuaia (Argentina) on voyages that last between 10 and 22 days. As far as amenities go, you can expect the cream of the crop on this ship, ranging from the Boutique and Bar to the Observation Lounge, Show Lounge, Photo Studio, Casino, Pool Deck and much more. 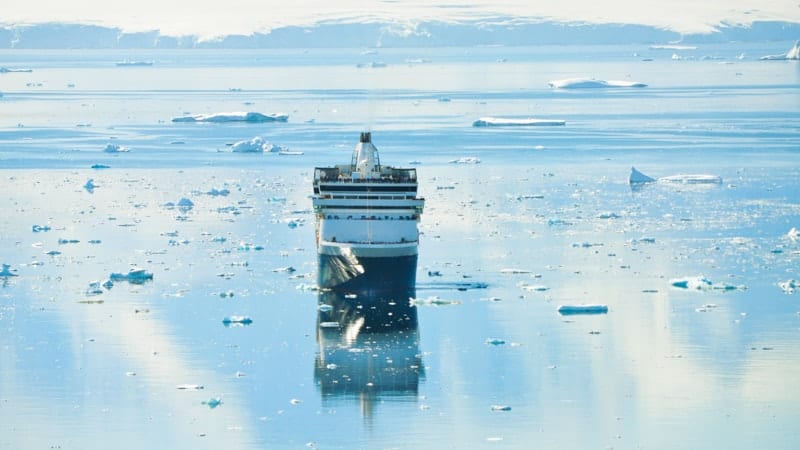 You might also find the best Antarctica cruise for you with Princess Cruises. In winter, they sail to the Antarctic Peninsula, when the Coral Princess embarks on a 34-day southbound journey from Fort Lauderdale. You can literally sail from the subtropical beaches of Florida to the icebergs of Antarctica, eventually arriving in Santiago, Chile—talk about an epic journey!

Once the ship arrives on the far south of South America, it will stay there through the Antarctic summer and offer Antarctica cruises between Buenos Aires, Argentina and Santiago, Chile. These epic one-way cruises last 16 days and include 6 different ports, including the Falkland Islands, Ushuaia and Punta Arenas. You’ll spend several days sailing along the coasts of the spectacular Antarctic Peninsula.

The Coral Princess is currently Princess Cruises’ only ship that can and does cruise to Antarctica. One of the best mid-sized cruise ships in the world, the Coral Princess sails to various corners of the world, from the Panama Canal to Alaska to the Antarctic Peninsula. It offers luxurious accommodations at sea, boasting more than 700 balcony staterooms.

The ship also has several dining options, including the Bar & Grill, the Princess Pizzeria, the Bayou Cafe & Steakhouse, the Crab Shack and the Chef’s Table Experience. When it comes to things to do, you also won’t have any lack of choices. On the Coral, you can enjoy lots of different facilities and venues, such as the freshwater pools and hot tubs, numerous shops, a Vegas-style casino, an art gallery, a movie theater and music stages. There are several kids, teens and family activity programs as well. 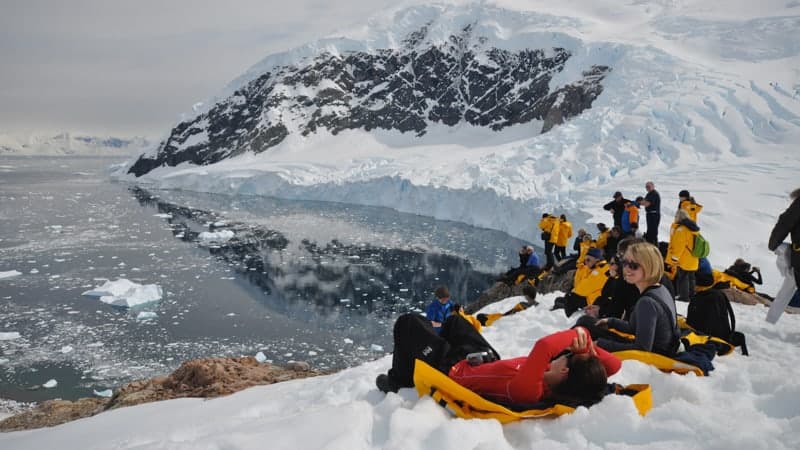 Our third Antarctica cruise line is Hurtigruten, a Norwegian-based company that specializes in expedition cruises to remote destinations. Its name literally meaning “Express Route” in Norwegian, Hurtigruten was founded in 1893 as a transportation and communication service along the rugged coasts of Norway.

Thanks to over a century of experience navigating the waters of Arctic Norway, it’s now one of the leading expedition cruise lines in the world. They offer immersion-style cruises focused on experiences and local culture to the remotest corners of the globe, from Svalbard, Norway and Iceland to Greenland, Alaska and the Northwest Passage. Of course, they also offer cruises in South America and Antarctica, the world’s wildest continent.

There are various Antarctica cruise options available, from both short and long one-way voyages to amazing round-trip sailings from Patagonia. These Hurtigruten cruises in the remote Southern Hemisphere last between 12 and 23 days. Popular departure ports are Valparaiso (Chile), Montevideo (Uruguay) and Ushuaia (Argentina).

It’s important to note that an Antarctica cruise with Hurtigruten is not your typical cruise. As we mentioned above, these are expedition cruises and you won’t find the abundance of facilities and luxuries on their ships than you might on Antarctica cruises with Silversea or Princess above. Instead, you get epic glacier excursions, magnificent close-up wildlife viewing opportunities, an immersive and hands-on Antarctica experience, and a wealth of background information provided by biologists, survival experts and experienced guides.

Currently, Hurtigruten has no fewer than four expedition ships that operate around Antarctica, all of which are ice-class ships built specifically for Antarctic explorations. 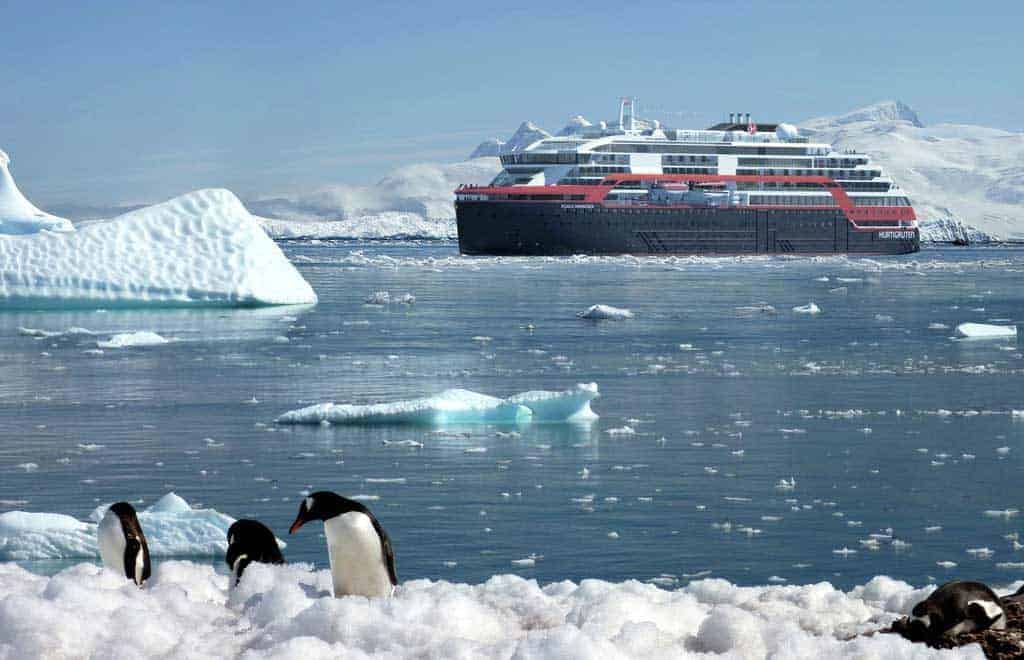 In addition to the two major Antarctica cruise lines, there are a handful other, smaller companies that offer cruises to the Antarctic Circle. These expedition cruise lines are all about adventurous sailings, usually on smaller vessels and with biologists, naturalists and professional photographers on board.